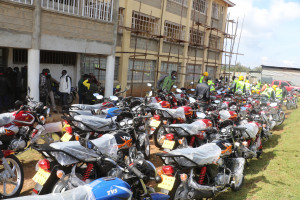 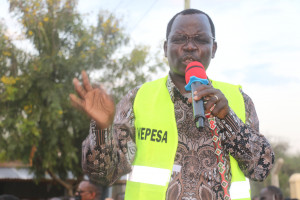 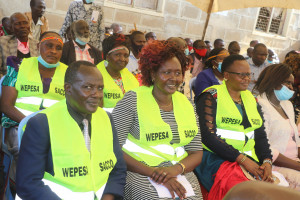 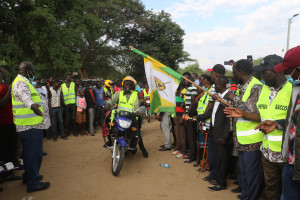 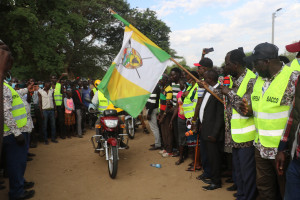 Boda Boada Industry, A Growing Source of Income for Many

The Corona-virus pandemic has brought unprecedented loss of life as well economic devastation in billions around the globe, resulting in 1.7 million of peope losing their jobs in Kenya. However, the crisis has also brought opportunities to many Boda Boda operators who have joined WEPESA Sacco in large number to benefit from the county’s initiative ‘Pata Boda na WEPESA.’

While presiding over the handing over of 100 motorbikes in Sigor, Governor Prof. John Lonyangapuo said that the industry is fast growing in West Pokot County following the move to provide subsidized motorcycles to the locals through WEPESA Sacco. He further said that the operators have embraced a culture of saving and borrowing, hence increasing income and wealth creation in many households in West Pokot.

With an initial investment of Kshs. 20,000, one can get a brand-new motorbike and pay later in small installments.

The governor also challenged the operators to maintain road safety at all times, as boda boda have been involved in numerous fatal road accidents before.

CEC Francis Kitelauyan said that at the moment, Boda Boda Industry rivals many formal jobs as alternative income. He said a great number of youth have embraced the Sacco, saving and applying for loans to invest in various businesses in the county. He said the Department of Trade and Cooperatives through WEPESA, is keen on empowering locals from the grassroots level and as a result, transform livelihoods.

Mama Dawa, one of the beneficiaries of the initiative, lauded the county government for the move. She said that without the incentive, many of them would not have been able to own motorbikes. “Many of us will be able to earn a daily income and take care of our families as a result of WEPESA. Jobless youths have also benefited from the motorbikes,” she said.

MCAs who were present among them Hon. Kapelsiwa and Ariono, praised the move, saying many unemployed youths will not only have an income generating activity, but also steer them away from negative vices.

President Uhuru Kenyatta recently revealed while launching a Sacco for the industry that the sector has 1.4 million riders who collect an average of Sh180 million daily, which amounts to Sh27 billion every month.